A windstorm on the evening of January 28, 2016 was the final blow for a large rotting Sitka Spruce tree by the Bessemer Road gate, about 7 miles up the Middle Fork road. It fell across the road, completely blocking all access to the upper valley. Two early arrivals parked on the side of the road and did their planned bike ride or hike from there. But a couple heading for Goldmyer Hot Springs were determined to get through so drove back home to get a chain saw and try to get enough of the tree cut out to drive through. Soon after they started working other locals that often help with tree clearing showed up and steady progress was made clearing the 3-foot diameter tree. After about an hour a 2-person King County road crew arrived with bigger chainsaws and a truck with a winch. They were able to cut through a healthier part of the tree and drag a large section out of the way. Normally King County is not responsible for road clearing because the paving project is not done, but they came out because they were concerned that people farther up the valley might be stranded. A path was finally cleared by about 3 PM.

Vehicles headed up the valley are blocked 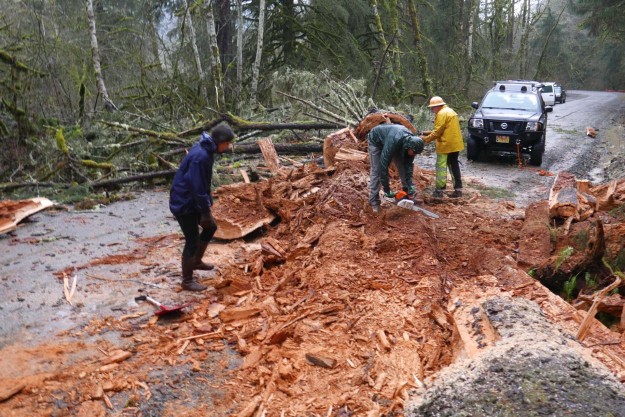 Volunteers start cutting through the rotten and splintered lower section 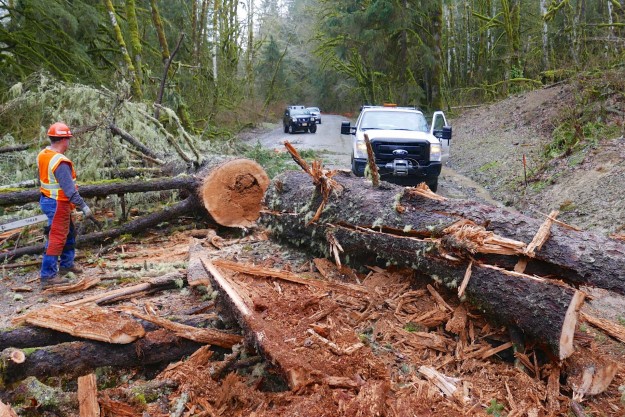 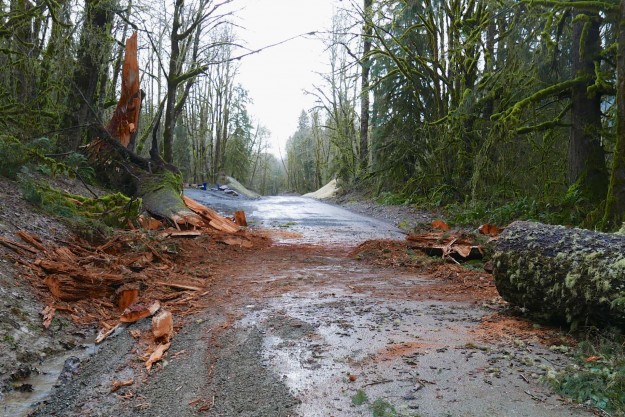 On February 5 another King County crew equipped with a big excavator returned to the spot to complete the clearing.

On February 5 the tree is completely cleared

Three severe fall storms have been devastating to some of the Middle Fork trails. This update summarizes what is known as of January 12, 2016. Updates will be added as news trickles in.

Little Si
No reports of problems in recent trip reports
Mount Si
A hiker on the day of the most recent storm reported no serious blowdown
Teneriffe Falls / Peak
On the WTA site Stuke Sowle posted a January 8 grand tour trip report including Teneriffe falls and peak, the CCC plateau, Mailbox Peak, and Granite Creek trail.
Mailbox Peak
About two dozen trees are down across the new trail, but deep snow obscures the trail higher up. There are no reported trees down on the old trail. The DNR has cleared trees blocking access to the parking lot. Some recent storms have left slippery snow on the access road to the parking lot so on those days the gate is left locked to prevent cars from sliding down the relatively steep slope.

Granite Creek – This trail has a large number of trees down and is impassible beyond the Granite Creek bridge. As of December 26 a trail has been broken in deep snow as far as the bridge. 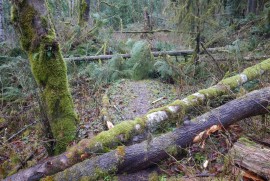 Granite Creek blowdown near the trailhead 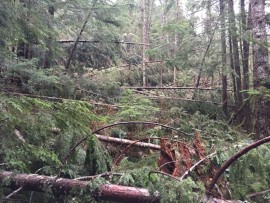 Blowdown on the Granite Creek trail beyond the bridge. Photo by Kevin Smythe

December 7 seekingultra report: Granite Lakes trail windstorm destruction – “The Granite Lakes trail off of the Middle Fork Snoqualmie road has been obliterated by blowdown after the bridge crossing Granite Creek. There are 100+ blowdowns in the 1/4-mile past the bridge and the 100 yards ahead we could see when we stopped appeared to be more of the same.

December 19 WTA report: Thompson Lake, Granite Lakes Trail – “After the second bridge is when the trail starts to become difficult to navigate. We went up and over fallen trees for about 30-40 minutes with NO relief and none that looked like it was coming. Ultimately it became too much and a little unsafe for the dogs to navigate.” 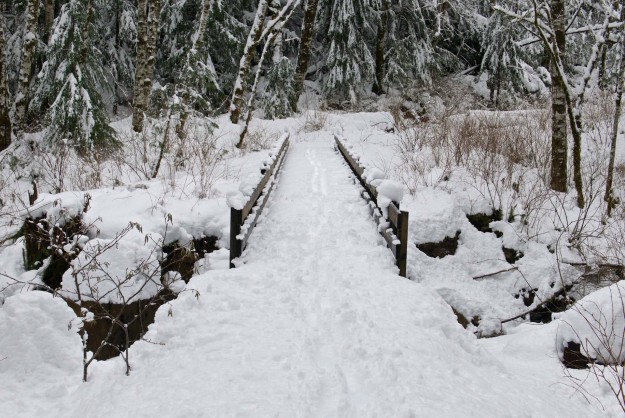 Sitka Spruce – Minor blowdown but still passable. The log over the small creek near the concrete bridge is partially washed out. Whitebark@nwhikers.net reports that he cleared some of the blowdown on December 29. 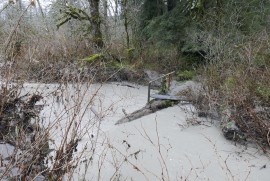 Blowdown on the Sitka Spruce trail

Pratt River – There are 27 trees down in the first .6 miles to the Rainy Creek bridge and it is very difficult to get past some of them because of steep slopes below the trail. The root ball of two trees pulled up part of the trail about 1/4 mile in but it is still easily passed. 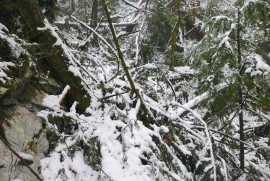 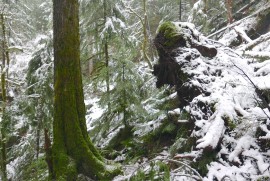 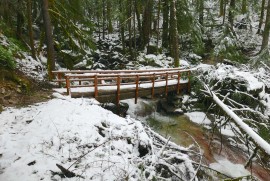 Rainy Creek bridge. A big tree just missed it on the far side

Bessemer Road – oneeyedfatman@nwhikers.net posted a Bessemer Road trip report from January 9, 2016. The Middle Fork road was icy and difficult to drive, there was some tedious blowdown on the Bessemer Road. He turned around at ~2900′. 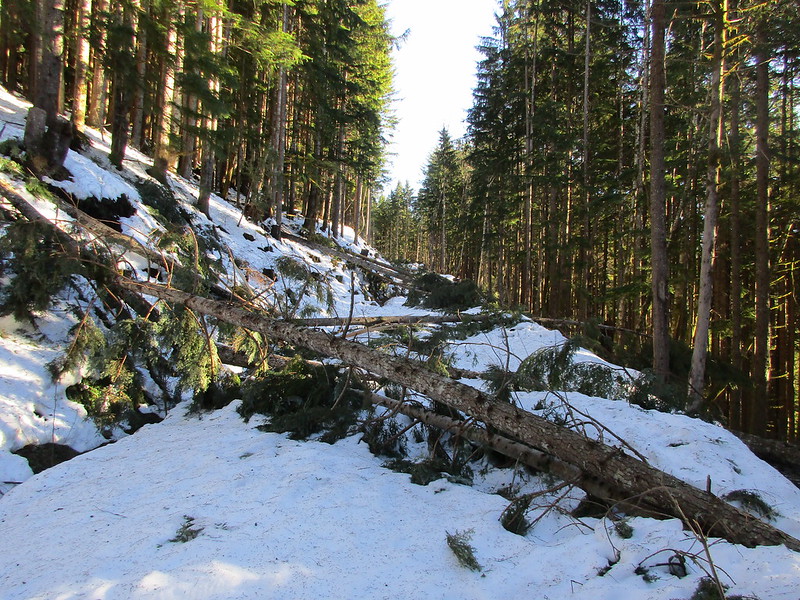 Tedious blowdown on the Bessemer Road. Photo by peaklist@flickr

Middle Fork – There are three trees down in the first mile, two of these are difficult to cross. Beyond that is unknown but probably bad. The winds were severe in this part of the valley based on the number of trees down across the road on the other side of the river. 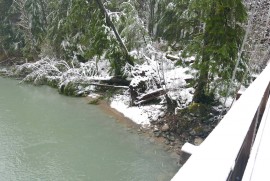 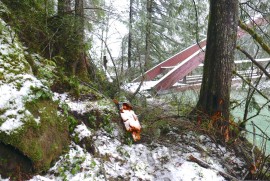 Blowdown on far side of Gateway bridge 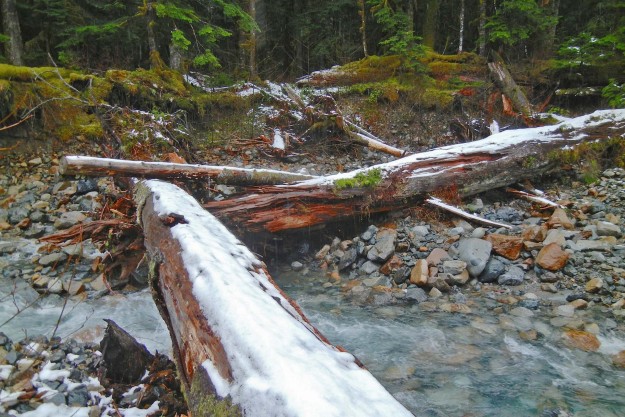 Damaged, but still usable log bridge over Burntboot Creek near Goldmyer Hot Springs. The December storm undercut the support on the far side and lowered the two big logs so they are no longer roughly level as before. The closer log has also been rotated so the flattened part no longer points up. Photo by Bill Davis.

Dingford Creek – No recent reports. Status is unknown but this part of the valley did not experience the worst winds and the trail is probably buried under snow for the winter season after the heavy snows of the Christmas week.
Taylor River –

The last quarter mile to the trailhead has been washed out. Park at the wide spot just past the first Taylor River bridge. The trail was apparently not hit too hard. On 12/19/2015 PataGenn at WTA reported “Snow started before the MF trailhead. 3-4″ of snow at the beginning, 7-8″ when we turned around at about 3 3/4 miles. Snow falling from the trees as it warmed up.” Photo by PataGenn.

Dutch Miller Gap – No recent reports. Status is unknown but this trail is probably buried under snow for the winter season after the heavy snows of Christmas week.