In early January the northwest was the recipient of another atmospheric river delivering moisture from the central Pacific. Cliff mass wrote “As much as 13 inches on the coast, with many locations getting 5-8 inches. But less than a quarter of an inch in the rain shadow over parts of Puget Sound and NW Washington. Big totals (4-6 inches) along the western slopes of the Cascades.” Rain gages in the North Bend area recorded over 4 1/2 inches of rain within a 24 hour period and the Middle Fork river responded with the 8th highest recorded flow to-date. Unfortunately the TANW1 gage, which is the only one that measures the Middle Fork in isolation failed midway through the event, but the last measured discharge* was 27,300 cfs at 11:15am, a couple hours after the rain had let up so the actual peak was likely close this value.

Precipitation map for Middle Fork area. The North Bend stations would eventually record 4 1/2 inches of rain on the morning of January 5. 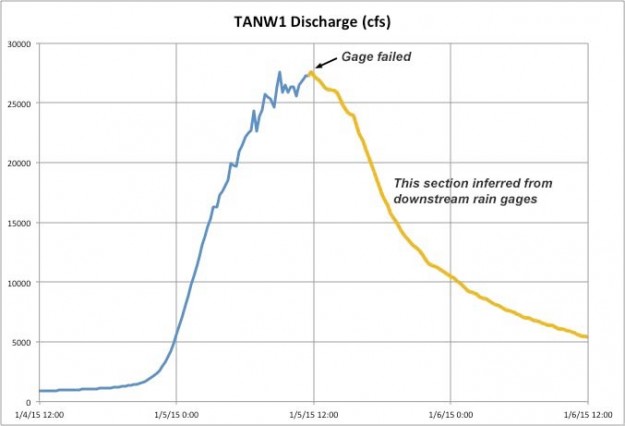 Discharge as measured by the TANW1 river gage. Unfortunately the gage failed midway through the storm so the rest of this graph was inferred as a proportionate estimate from downstream gages measuring the combined flow of all three forks.

An event with such high flows would normally have serious consequences for the Middle Fork road. This time was unique in that the Middle Fork paving project had completed the first of three years of work with the last two miles of pavement completed including many new culverts for improved drainage. Most of the new work held up well to the extraordinary water flow levels but a few exceptions resulted in the road subsequently being closed until Memorial Day.

These issues resulted in the closure of the road, ultimately until Memorial Day. The Forest Service’s Facebook announcement stated “The Mt. Baker-Snoqualmie National Forest is closing the Middle Fork Snoqualmie River Road (Forest Service road 56) for public safety until further notice. The road has recently experienced major storm damage making the road impassable. The Middle Fork Snoqualmie River Road will be closed at mile 2.2, near Valley Camp and Mailbox Peak Trailhead. At this time, Federal Highways Administration officials are determining how best to repair the road.”

* Some time after the event, the USGS retroactively removed TANW1 raw data from the record back to midnight on January 5 because it could not be calibrated. Fortunately, we were able to capture that last morning of measurements and based on experience of observing other high water events it was close to reality even if not up to USGS standards.